The last few weeks have been a doozy. First, someone in Kim Burrell’s congregation taped a snippet of a sermon of hers where she talked about homosexuality being a sin and repercussions for homosexuals. She had appearances on television, ceremonies and a radio show canceled after the outrage machine kicked into high gear.

Not much longer after that, Vivica Fox gave an interview in which she noted that her new show that revolves around male strippers (haven’t seen it) was not created with the gay community in mind and that her dancers don’t dance for gay men (or something like that). As a result, her business partner disavowed her. Similar to the Kim Burrell situation, the outrage machine, in its last mile of the outrage marathon, caught its 2nd wind and churned full speed ahead once more.

Betwixt and between those two events, my timeline (and inbox) was graced with posts that were a blast from the past for me. They took me on a journey from 1st grade through 7th grade and back again.

I could make several arguments, but I don’t think I need to. Anybody old enough to develop commentary on what a religious person said to their congregation already knows that before they withdrew support from Kim Burrell, she likely already believed exactly what she said. Those of us who managed to make it out of middle school alive knows that everybody isn’t invited to the party and every product or service sold has a target market and thus shouldn’t be surprised when a person says they created their business for a certain demographic (why you’ll likely never see a white person using Sta-Sof-Fro).

But, I’m not going to go there (maybe I just did). This blog is about our uncanny knack for being outraged first and thinking last. This blog is about the way we think our problems are a statement on everybody else but us so that we can maintain some kind of moral high ground that we don’t actually deserve.

The first screenshot is the by-product of a previous discussion about bisexual men who are not honest about it, also known as “being on the DL” (down low). The person who posted this is not a FB friend of mine but is friends with several of my friends. As shown, this person asserts that being on the DL is a result of homophobia.

When I read this, it didn’t make me think about homophobia or the fear that people who are on the DL might face in their everyday life. All I could think about was how immature of a stance it is. To think that an adult would excuse lying and (usually) wasting the time of someone they claim to have enough affection for to enter into a relationship with is unnerving. Being honest is the right thing to do. It doesn’t matter if the truth isn’t something you’re particularly thrilled to tell, you tell it because it’s right. If conditions have to be perfect for you to be honest with someone you claim to love (and in some cases, have married and made children with), you lack integrity. Point blank.

With that said, there are a couple of adult questions for people who find themselves in this dilemma. First, would you rather be known for being bisexual or being a liar who wastes people’s time and mentally, emotionally and/or physically puts them in harm’s way? Secondly, why would you expect anybody to embrace “you” when “you” won’t be forthcoming about who “you” are?

The next two screenshots are self-explanatory.

Apparently, if someone prefers not to date you because of your sexual past (or present), they are –phobic. I really don’t know where to begin here so I’ll just cut to the chase. Nobody has to like you. People are allowed to find you unattractive for any number of reasons. Calling them a “–phobe” or an “–ist” is not going to make them suddenly like you. Your options are 1) start lying about your life like in the first screenshot and thus become a shitty person by default or 2) accept that you aren’t their type for whatever reason and move the hell on with your life. For those who are unsure, the second choice would be the adult choice.

The fourth, fifth, and sixth screenshots highlight a common occurrence these days.

I’m going to skip over the fact that the person never answered the question of who should pay for the “nice things” and then later says the “nice things” come from the dollar store. I’m not going to touch the fallacious thinking that just because someone works they should be able to afford what their heart desires. I’m not going to address the fact that there’s a clear misunderstanding of what capitalism is.

What I am going to address is this trend where someone posts a mini-monologue about something that pisses them off (that probably shouldn’t) and when someone deigns to respond, the poster decides to steer the conversation away from any fecund discourse in order to restart their mini-monologue. If you thought of yourself as enough of an authority to opine, you should think yourself big enough to either respond to feedback on your opinion – even if it’s that you have no idea or were not clear in your initial assessment. Dancing around like Floyd Mayweather when someone dares to pick up and inspect what you put down is jejune. If words suddenly fail you, just take a page out of NeNe Leakes’ book:

The seventh screenshot is more hilarious than anything but had me SMDH anyhow. I sat and read it twice and said, “did this person just try to turn couponing into a social ill?”

I think the funniest part of this diatribe is that this person first seems to temporarily absolve middle and upper-class people of classism by saying their energy is worth something and then tells them they are indeed poverty-shaming by participating in clipping coupons and “life hacks.”

The thing is, everything isn’t a ploy from the elite to start the class war that will annihilate us all. If you don’t have time to coupon, the answer is simple: don’t do it. I tried to coupon for about three weeks but since I don’t need bulk Depends or 3 tubs of cream cheese for the price of 2, I decided to stop wasting my time.

I DECIDED to stop doing something that I found did not serve me. There was no need to conjure up theories about how corporate America wants me to lose bladder control or eat lots of bagels. I guess I’m just grown like that.

Before I get to the last and best of the fuckery, I’d be remiss if I didn’t point out how this person is against couponing for 20 cans of peaches but admits to having no problem with hacks for cheap cosmetics and couture. If you’re going to take down the system, your eyebrows must be on fleek while you do so, no? I’d luuuuurve to read a debate between this person and the dollar store poverty warrior from the previous section.

Now, for the grand finale…*drumroll*…the person who wants friends to report a closed group that is labeled as being for “cis” people only. 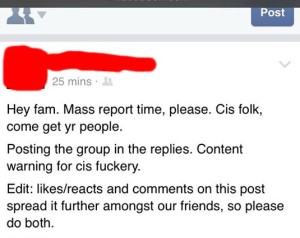 The person who posted this appears to be mid-30s but this post took me directly back to 1st grade. This is like me being mad about not being invited to a party, thrown by people I don’t know.

While I’m well aware that people have all kinds of personal issues and insecurities, what takes this over the top is that this person didn’t just express their individual agita. This person rallied their own little group, most of whom probably didn’t know about the group’s existence either, to try to get this closed (because it can’t be reiterated enough) group shut down. This person probably doesn’t even know what is said or done in this closed group, yet they felt the need to create a new movement around their ire over this closed group.

I’m Black and a woman. If I needed the attention (EUREKA!), I could spend the better part of the day rallying people to get all types of groups and websites shut down. But, I’m also an adult. Why would I waste that much time on people who don’t even know I exist?

I know we live in times that are unusual to us. I know that we are in a time where we are having to re-face the things that don’t work for us as a society that Boomers may have thought they dealt with efficiently decades ago. I also know, without a doubt, that some of our personal and collective loads would lighten if we would simply grow the fuck up.