2017 was probably the hardest year of my life, thus far. It started out okay but when the leaves began to change and the temperature became colder, so did my life.

In 2017, I lost my husband (through separation) and one of my favorite people in the entire world, my grandmother, through death.

Yet, out of what seemed like the worst of times, the best of times also emerged. You see, I’ve always liked learning and 2017 was the teacher that I needed. Being somewhat of a Type A personality, I always thought that I stayed prepared for the worst, but 2017 taught me how to really gird my loins.

2017 taught me a new fighting stance. 2017 taught me how to jump higher, run faster, duck lower. 2017 was the steeplechase that I needed to train me and get me in shape for what is to come. 2017 went in and found all the cracks and leaks that were going to cause me worse problems in the future and went to work on them.

Most importantly, in 2017, I learned I’m much stronger than I thought. I learned that the things that I thought would be Mt. Everest experiences for me were really hills that I could easily surmount. 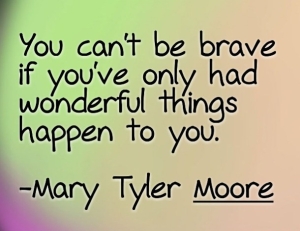 Nobody can promise us anything. People wish us well and have good intentions when they do so but life, I find, isn’t subject to any of us. Life, for those of us claiming to want to be better and do better, will sometimes serve us dishes that are more bitter than we like with the purpose of training our taste buds, so to speak. It’s up to us to be open to the road that leads us to where we say we want to be or reject the pruning and stay trapped where we are.

Though I shed many, many, many tears in 2017, I’m grateful that I made it. I’m thankful that I didn’t just make it, but that I came out of it with a new perspective on life and a fresh concept of who I am. I’m not trying to BS you with some new age/shout it to the universe and you’ll get it/think positively balderdash. If anything, I hope you take with you the fact that life can be difficult but, unlike people, when life gets hard, it’s not to harm us but to propel us. Our job is to be attentive students.