I’m going to let you all into my life a little. I work a day job. I get up and go to work most days of the week. I work long hours most of the time. On my day(s) off, I mostly sleep, do laundry, grocery shop, prepare my lunch for the week, give sassy responses to the men who contacted me on dating apps, and try to catch up on all my shows on the DVR.

I know that this doesn’t sound too much different from the lives of most adults my age. The thing that’s different is that I’m pretty sure that at least 75% of the people at my job need to be committed long-term (insert cries of ableism). There’s also another large segment who feel the need to be up your ass all.the.time. You can’t pop the top on a Crystal Pepsi without a barrage of questions that are all code for, “can I have some?” or some other way to inject themselves into your time, space and/or business.

Another thing about me is that I don’t really make friends at work – ever. I’ve met some cool people at this job and I’ve even met a few that I want to keep in contact with when it’s time for me to move on. One of these people really crossed one of my personal boundaries Friday, however, and now I’m starting to re-think where or if I want her in my life long-term.

The thing is…I don’t like feeling trapped. I don’t like feeling smothered. In fact, I’d go as far as to say that I actually fear the thought of being constricted. Friday was already a stressful day. I’m on the verge of PMS and the constant chatter was just irritating me. I put on my sunglasses, popped in my earphones, and worked away. Yet, it seemed that every half hour or so, somebody was trying to get my attention, not for work-related shit, but just because they didn’t feel like working in that moment. I felt like I had been locked up in a cell with a bunch of motormouths and, more than usual, it was a living nightmare.

Things came to a head when I ordered delivery for lunch. I went outside and got my food (shrimp) and came to my desk. I put my earphones back in, shades back on my face, and continued typing away. I didn’t even open the sack. Like clockwork, one of the people at work that I actually like came a-knocking. I didn’t even look in that direction, shook my head, and kept working.

Long story short, that lead to some adult form of the silent treatment (which in and of itself is a paradox if you ask me) for the rest of day. I was told I had a “stank attitude” that this person didn’t “have time for.” Let’s be clear, I already knew what was going to happen. This person was going to ask what was in the bag and then eventually if she could have a taste, (though she had already easily eaten 600-800 calories worth of snacks and other foods, before I even ordered my lunch). 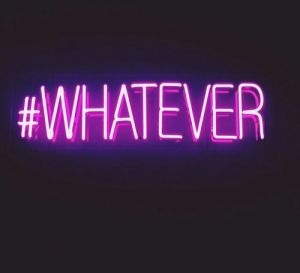 I live in the south. Here, if you don’t walk around like you’re at Disneyland, you’re “cold,” “mean,” “uppity,” and any other word that’s used to try to guilt people into being social. If you’re a Black woman, you can add in the (apparently) obligatory accusation of anger. I’m not talking about the smart-alecky extrovert vs. introvert memes. I’m talking about the lack of understanding that people have a right to their space; and that someone asserting that right should not be considered to have committed a social faux pas. And though it doesn’t rise to the same level of sexual harassment, the irony is not lost on me that people are all-in (at least verbally) on taking consent seriously but still have a problem accepting being denied people’s time, space and emotional/mental energy.

Speaking for myself, I find people exhausting. When I was 16, I had a job that involved heavy interaction with customers and I knew then that I wasn’t cut out for constant interplay with others. I was “shy” as a child but in adulthood, I literally become physically tired by too much interaction at times.

We talk a lot about the importance of self-care these days. What if someone’s self-care is silence and needing others to leave them the fuck alone until they can re-charge? Energy is precious and I will never apologize for trying to preserve mine. If you’re like me, you shouldn’t either.

If you’re one of the bigmouthed offenders, it’s time to stop. Someone wanting you to go be interested in something else but them at any given moment isn’t a personal slight but if you keep transgressing their boundaries, it could become something you can’t bounce back from…