This week, I saw an unusual amount of memes that all had to do with what school failed to teach people and what school should have taught people. These lists ranged anywhere from budget planning to taking out loans to community economic development.

It wasn’t the first time I had seen these types of memes. I mean, since about 2014, we’ve been bombarded with memes of people whining about all the shit that they never learned. Even the common sense stuff like making appointments appears to have escaped people (which is not necessarily a surprise considering the fact that if common sense were a stock, most people would perpetually be in the bear market).

When I see these memes, I just have one question, though.

What about your parents?

But let me back up though and address this particular meme.

As an aside, it’s funny that people talk about how none of us needs two rounds of algebra in the real world (shout out to the engineers, math teachers, scientists, etc.) but somehow, this meme-maker seems to think we all really need to know how to build guns and that if the government wants to kill us, they’ll make it look like an accident. 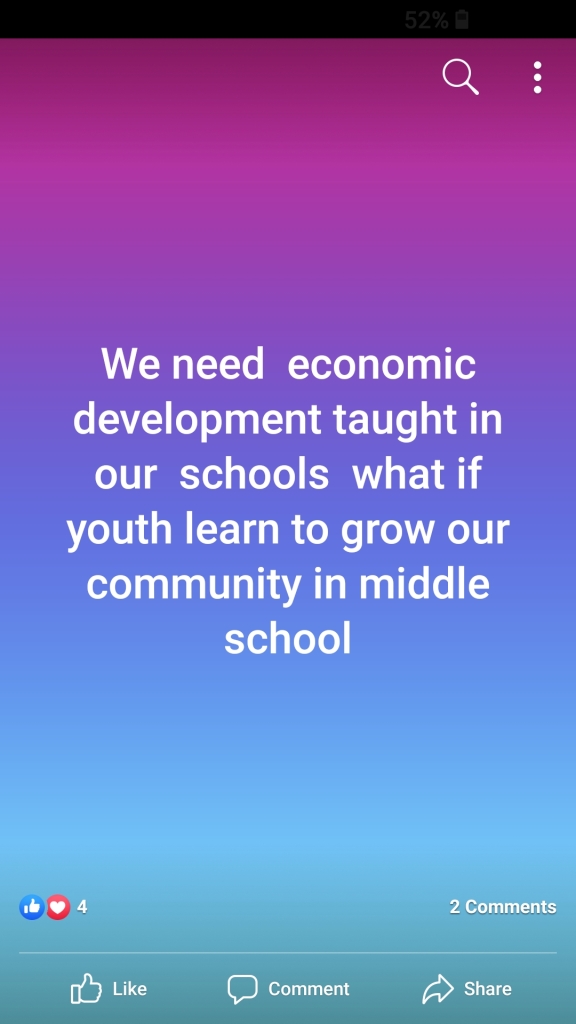 At some point, we have to stop blaming an underfunded, overcrowded educational system for not teaching you EVERY SINGLE THING you ended up needing to know in adulthood.

One, you have parents for a reason. All those times your mom told you that you couldn’t do or get something because your parents couldn’t afford it? That was your exposure to the budgeting lesson you think someone who makes $50k/year, is responsible for 200 students, and is actually a veritable stranger to you was supposed to teach you.

Two, you presumably have a brain. How to make a doctor’s appointment? You call the doctor you want to see, and when the receptionist answers the phone, you say, “Hello, I’d like to make an appointment to see Dr. _____.” Then, you answer whatever questions she may have. Don’t forget your insurance card.

It really is that simple. I wouldn’t lie to you. There are even healthcare providers that allow you to set appointments online. If you can order pizza, you can make a doctor’s appointment.

Loans? You read and ask questions. If you don’t understand, ask more questions until you do understand. You can even ask for a tentative payment schedule that forecasts what you’ll end up owing and how much the loan will cost you in the long run. Then, you sign or decline.

Budgeting? Mathematics + common sense. So, if you bring home $2,700/mo., your rent is $1,000/mo., your utilities equal $700/mo., and your commuting costs add up to $500/mo., and your groceries are $400/mo., no, the newest $350 Apple gadget probably isn’t a good idea because life has a way of surprising us and that Apple gadget isn’t a roof. You see, budgeting isn’t really about whether or not you physically have the money as much as whether or not it makes sense to spend it on certain things.

But, if 2016 taught me anything, it’s that poor people deserve nice things.

Thirdly, and I mentioned this on my personal FB page once, some of y’all are hard-headed and don’t pay attention to anything. Some of y’all had really good teachers who taught you way more than they were obligated to but you were passing notes, skipping class, or doing a bunch of other irrelevant shit and missed it. Now you’re mad because you think someone failed you when you really failed yourself.

If learning is something that most people agree is a lifelong activity, why are so many people from the Millennial/Xennial generation walking around as if they were supposed to be exposed to such topics as “community economic development” at some point in their K-12 education? At what point was the underpaid and overworked teacher supposed to ask who was interested in a career in public administration or social activism?

Which leads me to my next point. Although I like to pretend to know everything, I actually don’t. And when I decide I’d like to know something that I don’t already know, I do the legwork it takes to find out. For those of you unsure of the meaning of legwork, that just means that instead of griping on the internet about the shit I don’t know that I think someone should have volunteered to tell me by rote, I do my own research. I Google, find a book on the subject, or, depending on what the topic is, I may even ask my mother (remember that point about having parents).

The thing is, if you’re lucky, life will be longer than you think. If you aren’t lazy or one of those people determined to foul up every opportunity they get, you’ll keep learning. Some of your learning will be by trial and error (like when I trusted that a new beautician knew the difference between trimming my ends and damn near scalping me). Some of your learning will merely require you to lift your head from your phone for a few minutes and observe what’s happening around you (like, I’m sure you remember your mom making your doctor’s appointments for you so how you walked away not knowing any of it…IDK). A lot of your learning will require you to be an active participant. You may have to watch some shit you don’t want to watch or read some shit you don’t want to read.

You may have to speak to someone you can’t stand simply because they have the information you need (that’s for you former class skippers who didn’t like Ms. So-and-So but Ms. So-and-So would have helped you not embarrass yourself at 30 crying about not knowing the very shit she was teaching while you were at the mall on a Tuesday at 11:30 am).

At this rate, in the year 2050, we’ll have a bunch of 20 year-olds mad that nobody taught them to tie their shoe (a sure win for the velcro industry). Let’s hope potty training at 2 is still the standard though.

Let’s do better. Just like we say self-care is your responsibility, so is knowledge. Use the time it takes to complain on the internet about a perceived educational deficit you experienced 15 or 20 years ago to self-educate.

A couple of days ago, it was revealed that one of the owners of Soul Cycle and Equinox was holding a Trump fundraiser. As celebrities and regular degulars alike took to Twitter and Instagram to urge people to give up their memberships, the companies released statements saying that the fundraiser was being thrown with the owner’s own money, that he only owns a piece of the companies, and that the companies do not condone or promote bigotry of any kind.

As we all know, Chik-Fil-A is another company that we’re supposed to be boycotting because of its owners’ history of donating to charities believed to espouse anti-LGBTQ sentiments. Then, there’s Wayfair, Hobby Lobby, ABC Supply, HSN, etc… The list goes on and on and on and most of it has to do with owners being Trump supporters, Trump merchandise being sold (HSN), or the owners having an ultra-conservative stance on hot button issues.

It seems like many of these boycotts are actually just performative for social media. I mean, I haven’t eaten at Chik-Fil-A in years but the one closest to where I live, in a highly Democratic area, consistently has two lines that spill into the street. And to be honest, me not eating Chik-Fil-A has more to do with me staying sexy and refusing to sit in a drive-thru for 30 minutes than the owner thinking that there’s something wrong with being gay or abortion.

I still wear New Balance because I’m not going to worsen my plantar fasciitis and buy Nikes because the owner of New Balance is a Republican.

I think people are missing a few things in their zeal to boycott.

3. After the boycott, then what? These people are clearly unapologetic about their political stance. Chick-Fil-A is still poppin’, which is a sign that not even the boycotters are on the same page. And as of yet, I’ve not heard of any actual policy ideas that boycotts are supposed to spark. For example, the bus boycott during the CRM was done to end segregation on the buses. But, from what I can tell, all the boycotters want is for people to stop liking/supporting the Trump campaign or stop being racist/homophobic, etc. That’s not how that works. Boycotts should focus on policy change, not likeability. You think all those Republican millionaires really like Trump? No. You think you not buying a pair of shoes or a biscuit meal is going to change those millionaires internally? Not likely.

Nothing is wrong with boycotting. Hell, I’ve been boycotting Ross since 1997. But, I feel like while you’re boycotting, your eyes need to be on a prize and like it or not, when you finally break and get some waffle fries, Trump will still be president.