A couple of days ago, it was revealed that one of the owners of Soul Cycle and Equinox was holding a Trump fundraiser. As celebrities and regular degulars alike took to Twitter and Instagram to urge people to give up their memberships, the companies released statements saying that the fundraiser was being thrown with the owner’s own money, that he only owns a piece of the companies, and that the companies do not condone or promote bigotry of any kind.

As we all know, Chik-Fil-A is another company that we’re supposed to be boycotting because of its owners’ history of donating to charities believed to espouse anti-LGBTQ sentiments. Then, there’s Wayfair, Hobby Lobby, ABC Supply, HSN, etc… The list goes on and on and on and most of it has to do with owners being Trump supporters, Trump merchandise being sold (HSN), or the owners having an ultra-conservative stance on hot button issues.

It seems like many of these boycotts are actually just performative for social media. I mean, I haven’t eaten at Chik-Fil-A in years but the one closest to where I live, in a highly Democratic area, consistently has two lines that spill into the street. And to be honest, me not eating Chik-Fil-A has more to do with me staying sexy and refusing to sit in a drive-thru for 30 minutes than the owner thinking that there’s something wrong with being gay or abortion. 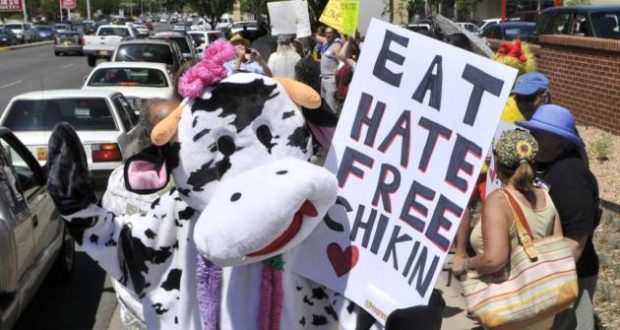 I still wear New Balance because I’m not going to worsen my plantar fasciitis and buy Nikes because the owner of New Balance is a Republican.

I think people are missing a few things in their zeal to boycott.

3. After the boycott, then what? These people are clearly unapologetic about their political stance. Chick-Fil-A is still poppin’, which is a sign that not even the boycotters are on the same page. And as of yet, I’ve not heard of any actual policy ideas that boycotts are supposed to spark. For example, the bus boycott during the CRM was done to end segregation on the buses. But, from what I can tell, all the boycotters want is for people to stop liking/supporting the Trump campaign or stop being racist/homophobic, etc. That’s not how that works. Boycotts should focus on policy change, not likeability. You think all those Republican millionaires really like Trump? No. You think you not buying a pair of shoes or a biscuit meal is going to change those millionaires internally? Not likely.

Nothing is wrong with boycotting. Hell, I’ve been boycotting Ross since 1997. But, I feel like while you’re boycotting, your eyes need to be on a prize and like it or not, when you finally break and get some waffle fries, Trump will still be president.