By now, we know that Trump is acting like a toddler having a fit because he can’t fly like a pigeon due to his recent LOSS of the 2020 presidential election to President-Elect Joe Biden. As of the writing of this piece, he still has not conceded and if you listen to CNN, he is likely using this DEFEAT to develop a grift where he gets the same poor unfortunate souls (shout out to Ursula), to donate money to his Trump 2024 PAC.

In the wake of the election he just LOST, he has decided to pretend that there was massive election fraud that boosted the Biden/Harris ticket into victory. His lawyers, who clearly don’t care about their legal careers or reputations, have filed several lawsuits in different states and….LOST them all. It’s weird because after LOSING the election, you’d think he wouldn’t want to take the chance to LOSE consistently but without people like him, there’d be no 90 Day Fiance, My 600lb Life, nor Love After Lockup.

During my free time, I troll Trumpsters on the New York Post FB page and I find it interesting how they’ve fallen for his claims of election fraud hook, line, and sinker. None, and I do mean, none of the ones I’ve encountered are able to accept the truth, even when presented with links and other empirical sources of information. You’d think that when you tell them that even if Trump got Pennsylvania back, he’d still lose, they’d at least turn around and finish their food, but no.

This would be cute were it not for the fact that….Trump and his attorneys aren’t even claiming election fraud. I mean…they’re saying that shit on Twitter and the news but in court where it matters? Neaux. 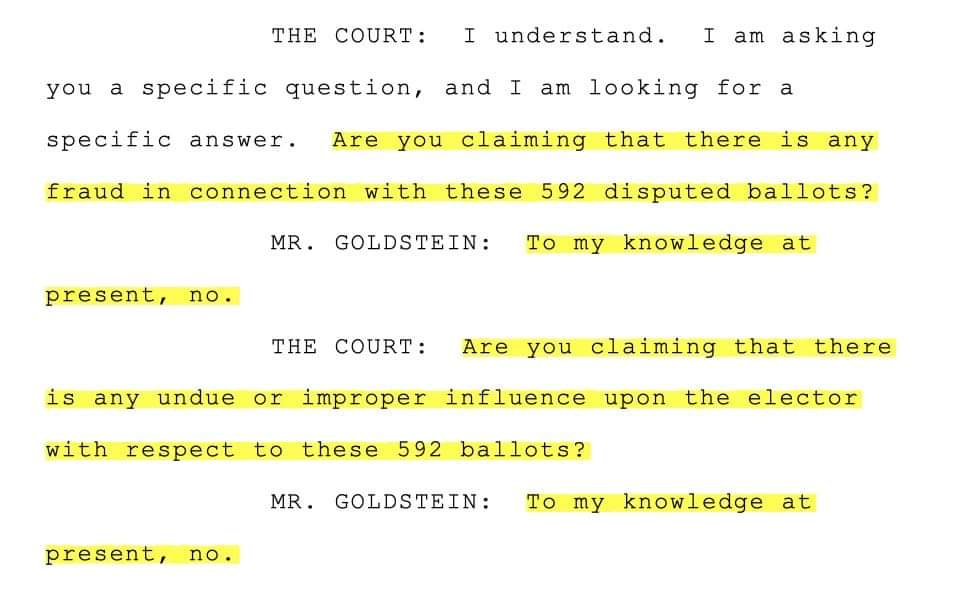 This picture refers to Jonathan Goldstein, one of Trump’s attorneys, being questioned by a judge in Pennsylvania. Although I’m tired doing work for free for the delusional among us, here’s a link to an article about the proceedings. I mean…if I’m going to set myself to be embarrassed for pay, I’d rather become a stripper. In fact, I think Trumpsters are much better off twerking for justice in this situation because COVID is getting worse and what else am I gonna’ do inside if not be entertained?

Imagine getting into an e-argument at 2 am (DST still has my sleep wonky) with lil’ ol’ me over election fraud that your lord and savior, Darnell J’Quarius Trump, told you was happening, but he doesn’t even claim election fraud in court. Imagine donating to the Election Defense Fund set up by Trumpsters to “protect the integrity of the election” and Trump already knows the election was just fine and he’s just being a sore loser.

It’s almost like when a woman does a love post on FB dedicated to her long-term boyfriend and then his other current girlfriends show up in the comments with pictures.

Listen, I’m all for loyalty and shit but when the receipts are presented, I trust that the purchase was made and there’s no need to fight about it any further. Almost every adult who understands multi-syllabic words and works directly or indirectly with elections as affirmed that this election was the most secure ever.

Hold on a minute my producer is trying to tell me something…wha…uh-huh…really? 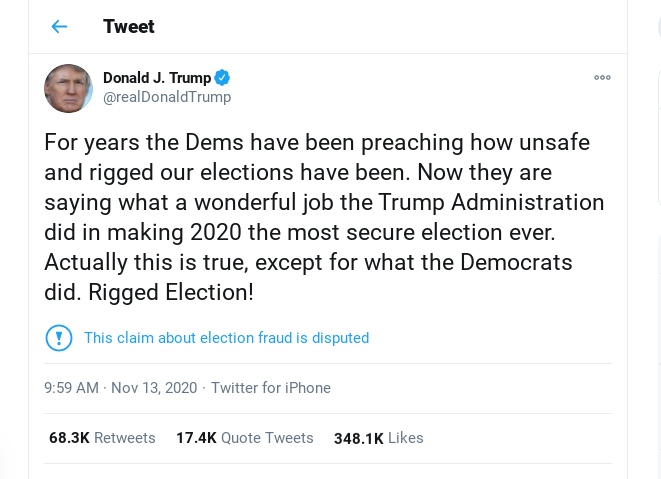 I’m finna’ go rue the fact that it’s November and I’m sitting outside in volleyball shorts and a t-shirt but before I go, I just want to make sure you Trumpsters know that you got played. Big time. You got played so hard, you need to go on Cheaters. You need to go on a daytime talk show about people who lost all their money to an internet romance scam. You need to shut down your page and come back with a stock photo with just your middle name and mother’s maiden name. You got tv-court-show-suing-for-the-money-I-spent-thinking-this-would-turn-into-a-relationship played.

You’ll heal eventually. The heartbreak will fade away. Blue Bell Homemade Vanilla is the best comfort food. Just don’t eat too much because before Trump leaves, his new SCOTUS may kill the ACA.

I’m alternating between CNN and MSNBC as I type this. According to CNN’s ticker, 70% of the total number of people who voted in 2016 have already cast early votes. That’s almost 95.5M people.

In my estimation, this is either very very good (as in Trump fucked up so much that people rushed to the polls to get him the fuck out) or very very bad (as in people are so willing to tolerate Trump that they didn’t think it through and went ahead and cast their votes for him). Either way, civic engagement is always a positive, I suppose.

Now, I’m no spring chicken so I know that as of today, November 2nd, in the year of our Lord, 2020, there are some of you still contemplating your options. Normally, I call you a name that is nearly synonymous with word “stupid.” However, 2020 has been rough on all of us and I feel the milk of human kindness running through my veins so I’m going to say this to you as if you’re my very own 5-year-old that gained 35lbs. carrying and went through 12 hours of labor with before launching you out of my crotch. 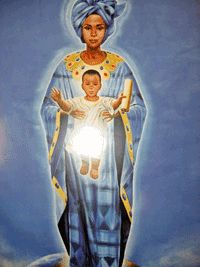 Example 1: If you had house that desperately needed a new roof, and you had to choose Trump or Biden based on their work history regarding governmental leadership, who would you choose?

Example 2: If you had a car that didn’t run and had to choose between Trump and Biden to fix it based strictly on their ability to speak in complete and coherent sentences, who would you choose?

Example 3: If you had a job where you performed on the same level that Trump has performed, would you still have your job?

Those weren’t hard questions but I realize that for those of you who want to play crazy, that test will require you to dig down deep and be honest with yourselves. And yes, all of the gifs allude to Trump.

Since I’m your loving mother in this scenario, I’ll leave you with this: I believe in you, Timmy/Tammy. You’re a smart boy/girl. I know you’ll pass the test with flying colors.